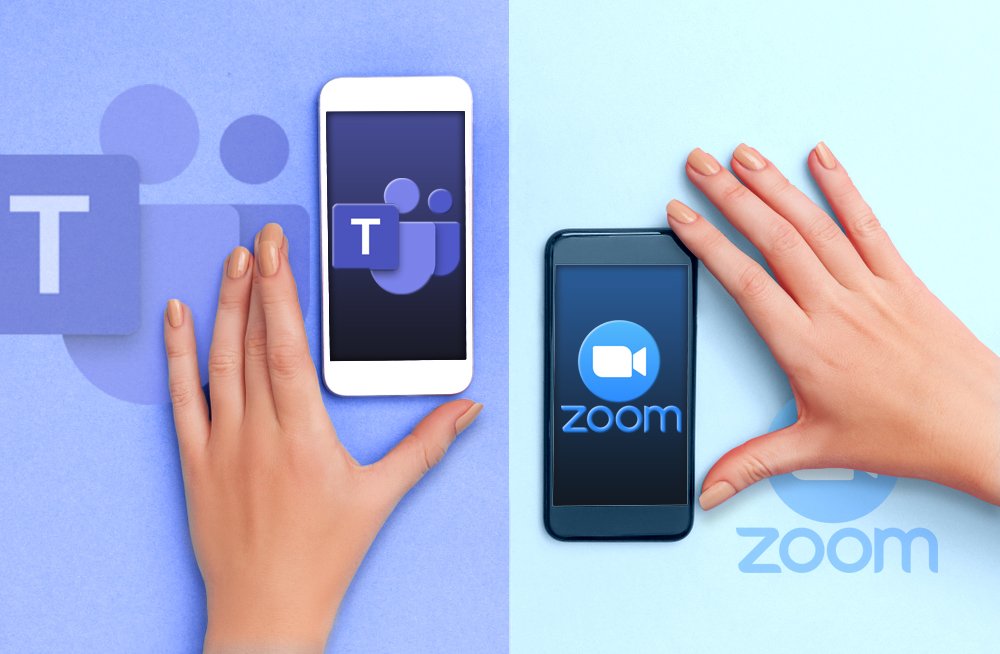 As the demand for remote teams and work from home increases, the need for effective online collaboration is growing, too. Whether you want to enjoy a virtual happy hour with friends, host a business meeting with colleagues or conduct a kick-off seminar for clients, Microsoft Teams and Zoom are the two popular options that can make all of those scenarios become a reality. But which one should your organization go for if you have not done so already? On the surface it may seem an easy decision to make yet there are some factors to take into consideration before settling on just one virtual collaboration platform. We are here to help you break down the pros and cons of each so you can focus on bringing the team together that little bit quicker.

The basics: Zoom is the same as Teams, right?

Well, yes and no. While both platforms offer plenty of similar features, a few key differences and distinctions may end up swaying you one way or another.

Microsoft Teams is an all-in-one collaboration tool. It was designed from the bottom up to facilitate real-time messaging, screen sharing, file sharing, organized conversations, and voice and video conferencing. This means M-Teams was built with literal team collaboration in mind and replicates every aspect of a physical office.

Zoom on the other hand was built specifically for one purpose in mind and that is of course video conferencing. The creator of Zoom, Eric Yuan, pitched his ideas for smart phone friendly video calls to his then company, Cisco, way back in 2011. The ideas were rejected, so Eric left to form Zoom and the rest is history.

When it comes to Virtual Team building though, the one main factor above all else needed is intuitive and clear video conferencing. While both platforms have this function and are pretty much equal in terms of video quality, there are still some major differences.

The user interface and experience are where Zoom wins in the Microsoft Teams vs Zoom discussion. After a few minutes of use, it is easy to see complete beginners to online video calling or indeed computers themselves can be up and running a few minutes. From the Google integrated login to the clear and open menu icons, users always comment on the simple interface and the ability to get end-users up and running with little to no training or IT support.

Microsoft Teams poses a bigger challenge to users as they will need to get up to speed on interacting with organisation login, channels, incorporate file sharing, and not get confused by the other Office 365 applications baked into Teams.  The full set of workstream functionality built into Teams clearly offers a broader area of usage and scenarios than Zoom but not the intuitive simplicity of video conferencing.

If choosing which platform to use for Online Team activities, the best advice would be; if you are already using Microsoft Teams and your users are all relatively adept at navigating the platform, stick with Teams. If on the other hand your team are new to online working in general but want to jump right in, Zoom is the go-to platform.

What about the features?

When it comes to features, both Zoom and Teams enable online meetings, chats, calls, screen sharing, and file sharing. The main difference between the two is obviously Microsoft’s integration with Teams and Office 365.  Any organisation using Office 365 can easily migrate everything into Teams for one-stop-shop of seamless collaboration, backups, and file searching.

Zoom, as a company, is a much newer player in comparison to the giant that is Microsoft, yet it manages to compete. Being able to focus on just one thing and doing that one thing well, Zoom’s video call features, while in session, are superior. Viewing all participants is streamlined, speaker focus is clearer, and you have the ability to move people where you want them on your own screen. Unfortunately, no baked in Office 365 integration like with teams but the Zoom / Slack integration is very slick and quickly becoming quite popular.

What are these ‘Break Out Rooms’ I keep hearing about?

The biggest feature used in Virtual team building is the use of ‘breakout rooms. Basically, it is the ability to open additional, simultaneous meetings and split a larger group into smaller teams. Each team will then transfer from the ‘main meeting room’ to their breakout room for whatever purpose needed. Both platforms offer this feature but with slightly nuanced behaviors.

Zoom’s breakout room feature is relatively simple. The host of the meeting can open, rename, automatically assign, reassign, and control every aspect needed for breakout rooms. As an educator, team leader or trainer that needs a certain degree of control over the session then Zoom is the winner.

On the other hand, if you are already experienced, Teams allows you to open multiple rooms, meetings and chats across multiple channels and accounts. Setting up breakout rooms manually is possible although laborious. As of the last Teams update there has been an addition of dedicated breakout rooms which is nearly as good as Zoom. The only downside being there is no clear controller or host, and users can jump from room to room at will. Perfectly fine for working or discussion groups but not so good for team competitions.

Do I need to pay?

Well, it depends. Does your organization need either of these platforms now? Does it make sense to officially migrate to a companywide preferred platform now that the landscape of WFH has settled somewhat?  If you know your company needs an online collaboration tool that can cover all bases, then Microsoft Teams is probably your best bet but be prepared to put in the effort at first to use its full potential. If on the other hand you know your team working from home are fine with the tools, they have but need to stay in contact more efficiently then Zoom is the one you need.

Of course, both platforms have free versions with limitations and Pro paid versions with increased functionality. For Teams you will need an existing Office or Microsoft account to use it properly whereas Zoom for free is limited to 40 mins per call.

Deciding if to purchase the paid versions depends on how much use you think you would get out of it. Some companies are getting into the habit of leaving Zoom meetings on and open for hours at a time allowing virtual teams to call out to each other at any time. Where if you value all the cloud solutions Teams offers then that cost is probably already tied to your Office 365 account.

But when it comes to Team building online and trying to bring your team together virtually, as long as the Virtual Team Building company has its own Zoom or Microsoft Teams business account, all you would need to do is simply click the invitation link and join via a browser to enjoy your online team building event. Of course, joining via the desktop app is a much better user experience but accessibility is just as easy via web apps.