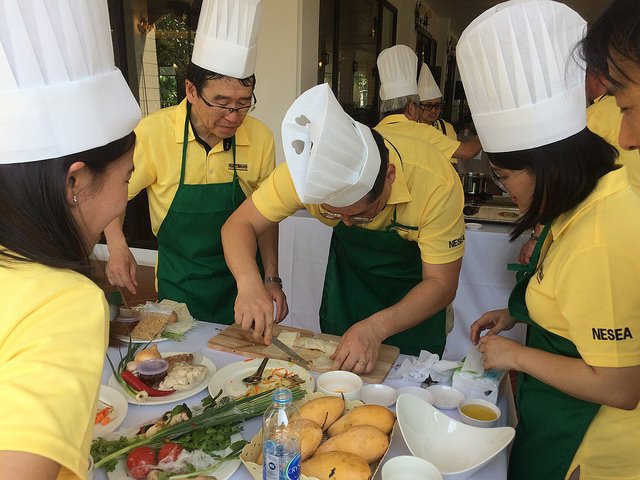 This was a Top Chef team building event with Huntsman in Krabi, Thailand.

70 Delegates from Huntsman stayed for a week-long conference at Sofitel Krabi. While they were there, they requested a leisurely cooking activity with Making Teams. As usual Making Teams offered three options and Huntsman selected the Golden option; a Top Chef program on the terrace of the hotel with a former Iron Chef Champion as the instructor for the day following the theme of the TV show.

The client for this Top Chef program was Huntsman Thailand & Vietnam, with representatives from the European office.

The objectives for this team building event were simply to enjoy an activity outside of the usual work and business meetings, allowing everyone to learn more about each other on a personal level.

After an introduction of the chef by the lead event facilitator of Making Teams, and a general health and safety briefing by the chef, teams were given aprons and chef’s hats and were then shown how to cook traditional Thai dishes. The group of 70 was split into 7 teams of 10 pax each, all teams having their own cooking station with materials and ingredients for the cooking to recreate the dishes shown to the best of their abilities. Teams had to allocate roles so that everyone was occupied with a task during the activity, with task division for preparing ingredients, cooking and presenting.

In three rounds the chef showed and then teams recreated a total of 5 dishes; 2 starters, 2 mains and 1 dessert. Dishes prepared were: Spring Rolls, Tom Yam Gung, Pad Thai, Stir Fried Chicken with Cashew nuts and Mango with sticky rice. After each round teams presented their dishes to the chef who judged them and gave them a score. Dishes were scored based on taste, presentation, correct application of the ingredients in the cooking process and in addition teams were judged one time on their station cleanliness.

The winning team went home with ‘menus’ with the recipes of all the dishes cooked.