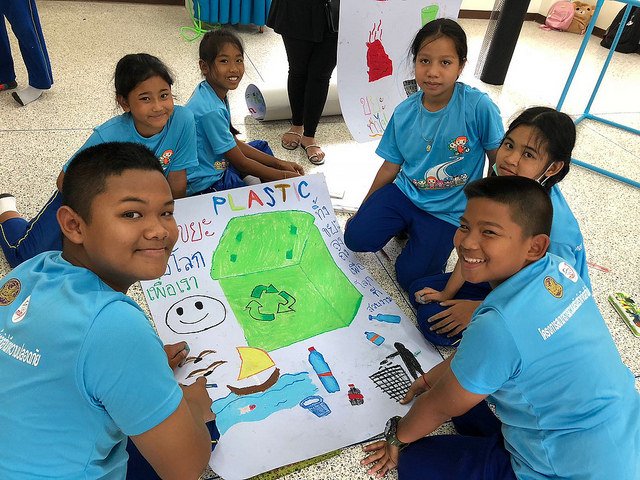 This was a Community CSR team building event with Expedia in Samui, Thailand.

On Saturday, 16 June delegates from Expedia joined hands in a full day community challenge to implement a waste separation system at a local school for the betterment of their local ecosystem and the school itself.

After research, Making Teams selected a school in the East of Samui for this CSR project with Expedia. Wat Samutthraram School is a small temple school with eight classrooms spread over two adjacent buildings capable for roughly 200 children.

17 Delegates from Expedia came together in Samui for their annual retreat with daily meetings. The group comprised a variety of nationalities; Chinese, Japanese, Malaysian, and French, among others.

The objectives for this team building exercise were to conduct an activity around the subjects of sustainability and eco-friendliness whilst giving back to the local community.

Following the objectives of the client and matching them with the needs of the school, Making Teams custom made an activity that would benefit the school and local environment.

After a general briefing and introducing the children and the Expedia delegates to each other, everyone was put into pairs and given the first task to collect all the recyclable waste from the classrooms and put it together in a central location to becoming aware of the issue that existed thereby creating the will to do something about it.

In the next part, the foundation was laid for the solution that would be implemented later in the afternoon; the materials for waste separation bins were prepared and a design was made for a wall painting that would indicate the importance of and how to separate waste. Before lunch the wall was painted with a white base so it would be dry in the afternoon.

After enjoying a Thai lunch box, the projected really started to take shape with everyone assembling the waste bin parts together and making a wall painting in the school yard.

In the final part of the day, the waste bins were placed in front of the wall painting and the earlier collected waste was separated into the bins for plastic, paper and general waste. At the same time, a person from the collection centre visited the school to explain what types of waste would be accepted as recyclable waste and how much is paid per kg of paper or plastic.

During the event de-brief, the children of the school we taught once more the importance of waste separation and recycling and an incentive rule was given out with the promise of useful school items to be given to those who would hand in recyclable materials.

A group photo with everyone involved marked the end of a successful and beneficial event.