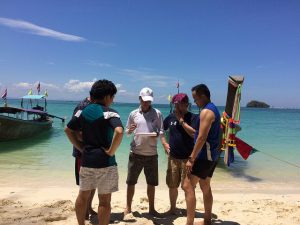 This was a Treasure Islands team building event with Microsoft in Phuket, Thailand.

A division of Microsoft Singapore booked the Treasure Islands team building activity with Making Teams in Phuket and went on an epic island-hopping treasure hunt in search of the hidden treasure. Through a series of team building challenges, collecting pieces of a secret map and a treasure hunt on a private island that lead them through jungle paths and secluded beaches, it was a day to not soon forget and the experience marked a highlight of their retreat.

The Treasure Islands activity took place around the islands on the East coast of Phuket, Thailand with the final hunt for the treasure on Koh Rang Yai island.

Delegates from Microsoft we’re holding their company trip in Phuket to meet each other and to strengthen their team with a team building activity.

The objectives for the team building were to get to know each other better, build stronger relationships with one another, and all while having a fun-filled experience!

The full day Treasure Islands consisted of traveling by speedboat to three different islands and conducting team building games on each to eventually find the hidden treasure on the final island.

After each game teams received part of a map of the final island which indicated the whereabouts of the hidden treasure. On the final island teams went through a treasure hunt in search of this treasure which was buried on the beach. During the treasure hunt teams received instructions on where to go to find images of animals along the path that lead through the island’s beaches and jungle. Teams were instructed to remember the animals and the order in which they found them to be able to complete a related puzzle. Solving the puzzle gave the teams the final clue to finding the treasure. The first team that found the treasure was the winning team and were awarded with prizes which were part of the treasure they’d found.